Alex Johnson swimming in the 16 & over age category had a fantastic weekend of swimming securing three 4th places, a 6th and a ninth place, 4 PBs across his 5 events and smashed 5 Club records.

Rounding off the weekend Michael Payne swimming in the 14 year age group secured a strong PB of 1.28s in the 100m Backstroke in which he also took 17th place.

A fantastic performance all round. 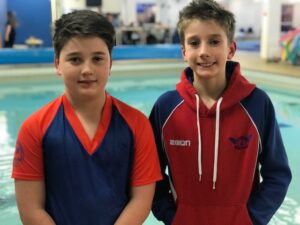